When the Marley and Me stars appeared on the popular German variety show Wetten, dass ?, they ended up with a mouthful of dog biscuit.

The show asks celebrity visitors to bet whether a special guest can perform the talent they claim to have. This time, it was a German woman who boasted that she could identify each of her team of Husky dogs by the sound of them lapping up soup. Wilson didn’t believe she could do it, while Aniston bet on her.

Then the show’s host, Thomas Gottschalk, told them that whoever lost the bet would have to eat a few dog biscuits. “I wish I had known the stakes first,” Wilson said.

When the dog owner, who was blindfolded, guessed right, Gottschalk invited both Wilson and Aniston to join him in a biscuit. Aniston protested, “But I guessed right!”

The host told her, “You’re a team, just like the dogs,” which prompted Wilson to put his arm around her shoulder and say, “Honey, we’re in this together.”

Gottschalk gave each of the actors a biscuit and said, “I’ll eat one, I’m the host. And Owen, you have to eat one. Jennifer, you can eat it if you want, but I’d really like to be able to tell my grandkids that I ate dog biscuits with Jennifer Aniston.”

On the count of three they all took a bite. How were they?

“They’re a little dry,” said Aniston. Wilson seemed to be enjoying his more, so Gottschalk gave him a handful in, yes, a doggie bag.

Gottschalk praised Aniston, saying no one would expect a Hollywood star to eat a dog treat on live TV, “but you’re easy.” Replied Aniston, “I guess all German dogs love me now.”

• Have you ever tried your pet’s food? Leave a comment about how it tasted on PEOPLE Pets! 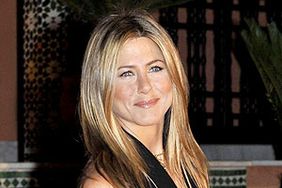