"Martha Stewart would be proud," says the Walk Hard star

There is no such thing as an ordinary Christmas card at Jenna Fischer’s house.

“I just sent out my elaborate, four-step Christmas card,” Fischer, 33, told PEOPLE at Thursday’s Hollywood premiere of her movie, Walk Hard: The Dewey Cox Story. “I did it again this year.”

“There is the card,” she says, “which I bought at Target, and a special insert-card, which has a little personal message to everybody. It has a special ribbon that I have to tie on. Then, there’s the return address label that’s Christmas-y and the Christmas stamp.”

Fischer adds, “I have to write in green and red ink. It’s crazy town – crazy town. Martha Stewart would be proud.”

Fischer, who stars on The Office which has been halted due to the writers’ strike, has had a busy 2007, winning a SAG Award, recovering from a back injury and starring in three movies.

“Gosh, it’s been a really exciting year,” Fischer says. “I’m looking forward to next year, and hopefully getting back to work.” 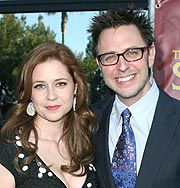 Jenna Fischer and Her Husband Split