Jay-Z spared no expense at his Watch the Throne release party inside Miami’s Fontainebleau. The rapper, who collaborated on the album with Kanye West, dropped $250,000 on Armand de Brignac champagne for the night, threw in a $50,000 tip and spent thousands more at Scarpetta, the Italian restaurant inside the hotel which stayed open extra-late for his crew. After a pasta dinner – and shots of tequila! – the rapper headed to the LIV Nightclub to continue the party. “Jay-Z was well-behaved and laid low all night on a banquette with his entourage of boys,” a source tells us. 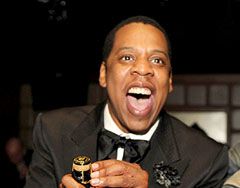