The comic and the actress tie the knot in Los Angeles, her rep confirms

The couple exchanged vows at the Hotel Bel-Air in Los Angeles on Friday night.

Cox, 28, met Mohr, 36, in 2004 when he guest-starred on her NBC drama. Mohr, who guest stars on CBS’s Ghost Whisperer, popped the question in February.

Mohr was a cast member on Saturday Night Live from 1993 to 1995, as well as the host of NBC’s Last Comic Standing and star of the cult FOX sitcom Action!

This is the first marriage for Cox, who was previously engaged to comic Bob Goldthwait. Mohr was married to model-turned-actress Nicole Chamberlain from 1998 to 2004. They have one child together, a son named Jackson.

Earlier this year, Mohr joked that Jackson, who was 3 at the time, would be planning the ultimate bachelor party. “(It) would be Big Wheels, a little Thomas the Tank Engine and then jumping off the furniture yelling, ‘Infinity and beyond!’ ” he told PEOPLE. “Once in a while he’ll mix it up and yell, ‘Guacamole and cheese!’ I have no idea (why), but it has the same result: a cannonball into my solar plexus followed by insane laughing.” 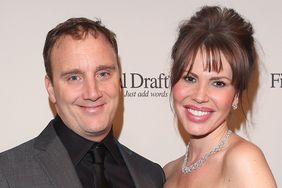