"Best day of my life so far ," the former Dawson's Creek says of marrying Kimberly Brook

When it came to formally announcing his wedding this weekend, James Van Der Beek chose Twitter.

Of his bride, Kimberly Brook, the former Dawson’s Creek star, 33, Tweeted on Sunday: “The woman I love did me the honor of became my wife today … I look forward to earning her for the rest of my life.”

An hour earlier, all he had Tweeted was a brief tease: “Best day of my life so far …”

Further details of the wedding remain scarce. In June, Brook told PEOPLE, We re so excited to announce we are expecting a girl [this fall]. We are thinking and taking suggestions for names, but we have no idea [what to call her] right now.”

Also marrying this weekend were former First Daughter Chelsea Clinton and Marc Mezvinsky in Rhinebeck, N.Y., and Alicia Keys and Swizz Beatz on the Mediterranean. 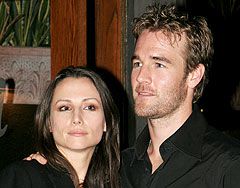