Jake Gyllenhaal battled hurricanes and tidal waves in The Day After Tomorrow, but on Wednesday he faced a real-life natural disaster: A fire at the California hotel where he was vacationing with his family.

Gyllenhaal, 26, and his actress sister Maggie, 29, were among the guests forced to flee Manka’s Inverness Lodge in the San Francisco Bay area when the two-story wooden inn caught fire around 2:30 a.m. Wednesday, the Marin Independent Journal reports.

“Jake was helping me pull things out of the fire,” Daniel DeLong, a chef and co-owner of the historic lodge where the actors had often vacationed, told the Journal.

The blaze apparently started after a tree crashed into the back of the building near a water heater. “It was during a very high windstorm and a tree came down. The cause of the actual fire has not been determined at this point, but it totally destroyed the lodge,” Kaaren Gann, a spokeswoman for the Iverness Fire Dept, told PEOPLE.

Eight people were believed to have been upstairs in the lodge when the fire broke out, while others were staying in cabins scattered throughout the property, Gann said. Only the lodge burned down, and no one was injured.

The inn and its restaurant were known as a place where A-listers could unwind in a relaxed environment: Prince Charles dined there last year, and DeLong told the Journal that over Christmas he’d cooked grits for the Gyllenhaals as well as actress Frances McDormand and her husband, filmmaker Joel Cohen. 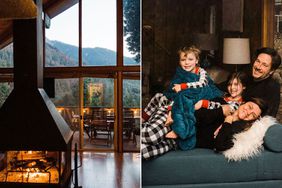