Former money manager to the stars Dana Giacchetto, 38, was sentenced to a 57-month prison term on Wednesday after pleading guilty to charges of looting stars’ accounts, reports Reuters. Giacchetto, a one-time trusted financial advisor whose $100 million Cassandra Fund clients included Leonardo DiCaprio, Ben Affleck, Courteney Cox Arquette and Cameron Diaz, was tearful in court as testimony revealed that he used their money (over $9 million) to pay for his personal expenses and a beyond-his-means lifestyle. Subsequently, it was disclosed that he attempted to cover up his misdeeds by shifting money between accounts. U.S. District Judge Robert Patterson admonished Giacchetto, saying, “You did go out of control.” And Giacchetto, who was charged and arrested last April and attempted to flee the country a week later (he has been serving time since then), reportedly weeped as he addressed his victims, saying, “I am truly sorry from the bottom of my heart. I never woke up in the morning and said I’m going to rip off my clients.” His lawyers claimed that their client had been abusing prescription drugs and alcohol and asked that he be considered for a drug rehabilitation program to reduce his term by a year. 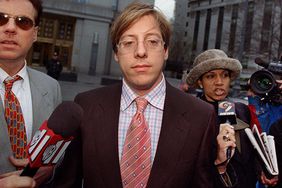