A New York judge has ordered Mick Jagger to pay $10,000 per month in temporary support to his ex-lover Luciana Morad and their infant son. Identifying himself as “Michael Phillip Jagger” when he testified in a Manhattan courtroom via telephone from London Wednesday, the Rolling Stone, 56, acknowledged he fathered a boy with Brazilian lingerie model Luciana Morad, 29. Blood tests also confirmed the paternity of the child, Lucas Maurice Morad Jagger. Jagger also told the judge that he does not object to being listed as the father on the birth certificate of the child, who was born last May 18. Morad was seeking $35,000 per month, “a bit over the top unless she dresses the baby in mink and diamonds,” a spokeswoman for Jagger told USA Today. The final figure for support payments will be decided at a May 9 court hearing. 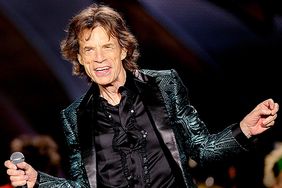