Despite being in the midst of a complicated legal drama, Jaden Smith‘s girlfriend, Sarah Snyder, still has her sense of humor.

The 19-year-old blond posted a photo of herself wearing some rather rebellious attire – a T-shirt with her own mugshot on it.

She captioned the snapshot, “56” referencing to the Future song by the same name, which is inspired by DJ Esco’s jail sentence.

But contrary to reports, Synder was not wearing this shirt when she appeared in court on Wednesday to face allegations that she stole a $15,995 Hermes bag earlier this year.

“It was erroneously reported that Ms. Snyder was wearing the much discussed ‘mug-shot’ T-shirt to her Court appearance,” Snyder’s attorney, Robert Schuster, tells PEOPLE. “Ms. Snyder was not wearing a t-shirt to court. She was dressed respectfully in proper courtroom attire.”

Snyder made a court appearance in Bedford, New York on Sept. 30 to face charges of one count of Grand Larceny in the third degree, a class “D” felony.

“The purpose of the latest hearing in Bedford on Sept. 30 was to determine if the Westchester County District Attorney was willing to decline to prosecute based upon alibi materials that had been submitted,” says Schuster. “They were not so willing and my office made it clear on the record that Ms. Snyder was not interested in accepting a plea to any charge.”

He continued: “The clock is ticking on this prosecution and The Law Offices of Robert Schuster will continue discussions with the Westchester County District Attorney s Office in efforts to urge them to decline prosecution. We are prepared to try this case to verdict should it be required.”

Schuster insisted that Snyder is innocent on all charges, stating that as her alibi states, she was not in New York on the date of the alleged crime.

“It is important to make clear that despite the serious nature of the charges levied, my client, Ms. Sarah Snyder asserts that she was not in the State of New York at the time this incident allegedly occurred. She was not in Westchester County at that time, nor was she in the Town of Bedford,” he explains. “In fact, prior to her arrest months after this alleged incident occurred, Ms. Snyder cannot recall ever having been in the Town of Bedford.”

“I caution all who have been so interested in prejudging this case to remember that my client is clothed with a veil of innocence unless proven otherwise. We are confident that Ms. Snyder will be exonerated.”

Snyder made headlines when she was seen packing on the PDA with Smith, 17. The young couple cuddled up and locked lips as they watched the Gypsy Sport show at New York City’s Milk Studios.

While it’s no question that Smith and Snyder are getting close as of late, Schuster says he does not see her high-profile relationship interfering in her criminal case.

“I have no reason to believe that Ms. Snyder is being treated any differently than any other defendant by the District Attorney s Office,” he said. “However, any criminal prosecution has an amplified effect on a public figure due to the potential for prejudice and the certainty of increased scrutiny. To be crystal clear, I have no comment on any question regarding Mr. Smith.” 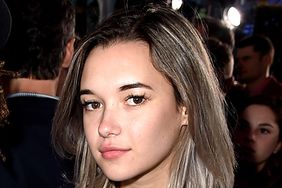