Black and Haden, who met at Crossroads, a private high school in Santa Monica, only started dating last April. They recently exchanged vows in a private ceremony in Big Sur, Calif.

Black, 36, is coming off the big-screen success of King Kong. His credits also include High Fidelity and School of Rock, and he’s one half of the comedy-rock duo Tenacious D, with partner Kyle Gass. The pair is due to release a film later this year, Tenacious D in: The Pick of Destiny.

Tanya Haden, a 34-year-old musician, is a triplet. Her sisters, Rachel and Petra, are musicians as well, having formed the band That Dog in the 1990s, and Petra recently released an a cappella cover album of The Who Sell Out. 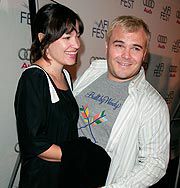