It's a Girl for Gwyneth Paltrow & Hubby

Gwyneth Paltrow and her husband Chris Martin have a new addition to their family: A baby girl named Apple Blythe Alison Martin, People has learned exclusively. The baby, weighing 9 lbs 11 oz, arrived Friday, May 14, at 1:00 a.m. after what a source close to Paltrow said was “a long labor.” Both mother and daughter are healthy and doing well in London.

The couple – who divide their time between London and Manhattan – announced Paltrow?s pregnancy last Dec. 3, two days before the “Shakespeare in Love” Oscar winner, 31, and the Coldplay frontman, 26, quietly became man and wife at a ceremony in Santa Barbara, Calif.

As PEOPLE reported at the time, the surprise nuptials – no family members, not even Paltrow’s mom, Blythe Danner, attended the ceremony – capped a whirlwind week for the pair, who had looked “very intimate” while dining Nov. 29 at New York City’s Da Silvano restaurant.

Only two days after that, on Dec. 1, after visiting a doctor’s office on Manhattan’s Park Avenue, they acted like any other young, happy, expectant couple, with Martin playfully snuggling and patting Paltrow’s tummy.

When Paltrow taped a Dec. 4 appearance on “The Ellen DeGeneres Show” to promote her Sylvia Plath biopic, “Sylvia,” the comedian surprised the actress with baby gifts, including a $3,000 Silver Cross Balmoral navy blue handmade pram (a British baby carriage).

The baby is due “summer-ish,” Paltrow told DeGeneres back then. “It’s exciting.”

However, as she admitted to Jay Leno, “The Jewish part of me is superstitious about talking about it, so when people say, ‘Are you going to find out about the sex?’ ‘Do you have weird food cravings?’ or ‘How does your mom feel?’ I don’t want to answer those questions.”

Last week, though, the health-conscious Paltrow – who practices yoga daily, follows a strict macrobiotic diet and hadn’t eaten white bread or dairy in three years – was admitting to her pal Sadie Frost on Frost’s British talk show, “What Sadie Did Next,” that when she “got pregnant, it was like ?pass the biscuits'” – along with grilled-cheese sandwiches, Chinese take-out and banana toffee pie.

As for the reaction from Paltrow?s mother, “I spoke to Blythe and she was thrilled,” said one source close to Paltrow when the pregnancy was first announced. “She’s been wanting grandkids forever.”

Paltrow’s fellow actors chimed in to say that she would deliver a typical award-winning performance in a maternal role. “She’ll be a great mother,” Aaron Eckhart, her costar in 2002?s “Possession,” told PEOPLE. “She’s tender and loving, and that baby is going to do yoga like nobody’s business.”

Added ex-beau Ben Affleck, in reference to the death of Paltrow?s father, Bruce, in October 2002: “She had a really tough year. And so it’s wonderful to see somebody get some happiness.” 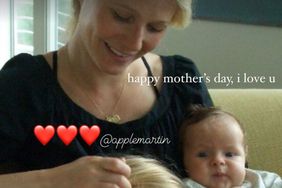 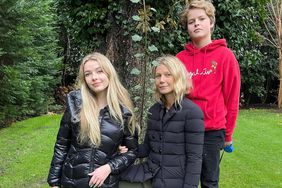