The group denies it dumped JD Fortune, who is now living out of his car

He shot to fame on a 2005 reality show that landed him as the frontman for INXS – but now JD Fortune has been dumped by his band and is living out of his car.

“I was in an airport in Hong Kong and literally got handshakes that said, ‘Thank you very much,’ ” Fortune, 35, told Entertainment Tonight Canada. “I found myself really alone because I had traveled with these guys for 23 months.”

But in a statement carried in Tuesday’s editions of Australia’s Melbourne Herald Sun, the band’s creative director and global business strategist, Chris Murphy, disputes Fortune’s account, saying: “Not only are we shocked by the claims, even the place the supposed incident was to have taken place is a mystery.”

Fortune, an army vet and former Elvis impersonator, was brought in after the band had tried several attempts to replace their lead singer, Michael Hutchence, 37, who was found hanged in a Sydney hotel room in 1997 after what was deemed a likely (but inconclusively proved) suicide.

“The band have always stated to me that Fortune’s services could potentially be contracted again when INXS next tour,” according to Murphy.

“In fact, he was next on my list to call regarding a very big recording project I am putting together for INXS at present. I guess I have no reason to call him now.” 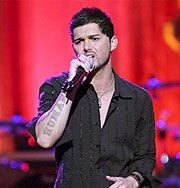 Down Under on Top