There’s no doubt the Dancing with the Stars crew knows how to throw a party.

“When he walked in the door at 8:30, everyone shouted ‘Happy birthday!'” says a partygoer. “They all ran up to give him a hug and show their love for him on his special day.”

Guests at the bash grooved to old-school tunes and got their tarot cards read while sipping a customized Ciroc vodka cocktail with Caffeinated Club named “The Valentin” in honor of the birthday boy.

They also tucked into margherita pizzas, mini meatballs, grilled chicken and gnocchi in between songs.

At the end of the night, Chmerkovskiy was presented with a tiramisu cake complete with sparklers.

“Everyone joined in to sing ‘Happy Birthday,’ ” says the guest. “He had the best night.” 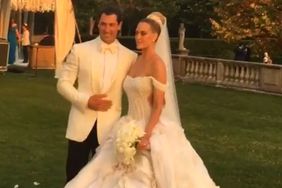 All The Details of Maks and Peta's Fairytale Wedding: The Dresses! The Dances! The ... Serenade?