As the mystery surrounding her death deepens, friends say she struggled with the pressures of stardom

Brittany Murphy came to Hollywood as a teenager full of talent and promise – but struggled to reach her full potential over her 18-year career, sources tell PEOPLE, due to a set of “inner demons” that included troubling body image issues.

“She was drastically different when she entered the business,” a friend tells PEOPLE “Full of life, determined. But over the past few years, [she went] downhill. There was always something off, something in the way. She had a lot of inner demons.”

In 2002, after Murphy revealed a radically slimmed-down silhouette in the film Spun – a departure from the rounder figure that fans remembered from her breakout 1994 film, Clueless – tabloids linked her weight loss to cocaine.

Three years later, she attempted to set the record straight: “I have never tried it in my entire life,” she insisted to Jane magazine. “I’ve never even seen it It couldn’t be further from the truth.”

The same year, while promoting Sin City, she fought back against reports saying she had an eating disorder.

“I’m the same size I was in Clueless; it’s just that the weight in your face changes as you grow and get older,” she said. “This is my body. I’m proud of it I’m healthy.”

Yet friends tell a different story.

Report: Brittany Murphy’s Will Leaves Estate to Her Mother

“She had insane self-image issues,” one says. “Her weight, her hair, her clothes, her skin, her teeth, everything. She was always so self-conscious.”

Adds another: “A lot of her problems were due to poor self image. She wore extraordinary amounts of makeup, tons of fake eyelashes, got her teeth capped, dyed her hair blonde, lost weight – she wanted to be a beauty. She didn’t want to be the fat girl from Clueless. She didn’t eat a lot. She would drink copious amounts of coffee.”

“She seemed to go through a change on Clueless,” Heckerling told an entertainment blog Sunday. “Maybe she felt like she was not the, like, skinny, pretty girl, you know? And then the next few movies she was, you know, thinner, blonde … going out with Eminem and Ashton Kutcher.”

Friends say Murphy found comfort in her mother, Sharon, with whom she was “intensely close,” says one. “She and her mom lived together for years. Everyone thought it was a bit odd, but her mom was her soulmate, her guardian, her best friend. They loved each other so much, despite their differences sometimes. Her mom was her angel.”

“We’re extremely close, extraordinarily close,” Murphy told PEOPLE in 2004 of her mother, who survived a battle with breast cancer. “To say ‘best friends’ would be to diminish our relationship.”

But Sharon also felt the pressure on Brittany to look the part of a star. “She was obsessed with her looking slim,” says the source. “She’d say, ‘I don’t like that wardrobe on her.’ ”

Brittany Murphy’s Husband Tells PEOPLE: ‘We Want to Know Why We Lost Our Baby’

Her husband, Simon Monjack, was the other great love of Murphy’s life.

After a brief relationship with her Just Married costar Kutcher and engagements to talent manager Jeff Kwatinetz and crewman Joe Macaluso, in 2007 Murphy married the British screenwriter (The White Hotel) in a small Jewish ceremony at their L.A. home after just four months of dating.

That June, when tabloid reports surfaced alleging Monjack was a “shady” businessman facing major debts – and that he and Murphy had married quickly to help him avoid deportation due to an expired visa – both Monjack and Murphy vehemently denied them, telling In Touch Weekly they were “preposterous lies. Everything was just so fabricated and hurtful.”

Despite their quick road to the altar, their relationship seemed to be working. At the Dec. 3 Tt event, Murphy giddily spoke of wanting a first child in the New Year.

Friends, however, remained unconvinced. “Not many around her were fans of [Monjack],” says a source. “She wanted to find someone to share her heart with so badly. They thought it was all a bit forced, but you couldn’t help but see her joy and devotion. She really wanted it to work.”

Through the ups and downs of her love life, Murphy often exhibited strange behavior on the job.

Trouble on the Set

“She was unfocused and never knew her lines,” says a source who observed Murphy on one set a few years ago. “She wouldn’t do the same take, the same way, twice There were accusations of drug use. She and her mom said they weren’t true. Brittany said ‘Everyone was saying I’m doing drugs and I’m not.’ ”

An insider on her recent indie thriller Something Wicked told entertainment site The Wrap that Murphy “was barely there She’d go in and out of consciousness in the middle of takes.”

She was replaced by other actresses for two parts recently: Disney’s animated Tinkerbell film and the thriller The Caller, which Murphy had been shooting in Puerto Rico until late last month. Monjack was rushed to Cedars-Sinai Medical Center after their flight home from Puerto Rico. Murphy reportedly told emergency responder she thought he was suffering from an asthma attack, said news reports.

As her loved ones now struggle to cope with her death, friends mourn the tragic loss of someone who always dreamed of stardom, but never felt her talent was enough.

“She had big dreams,” says one source. But “she always wanted to be something she wasn’t.”

• With reporting by JEN GARCIA, JULIE JORDAN and LIZ McNEIL 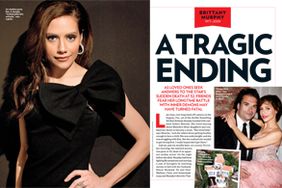 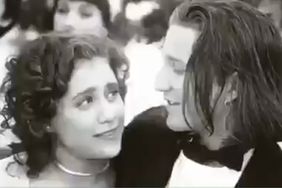