Justin Bieber and Snoop Dogg's hand jive, Nicole Richie's meet and greet with a JoBro – and more surprise pairings from the "We Are the World" sessions

Sign them up for this all-star jam session! Teen sensation Justin Bieber finds a new friend in rapper Snoop Dogg while participating in an updated recording of "We Are the World" at L.A.'s Henson Studios Monday. The event, which drew over 80 singers and actors, will raise money for Haitian earthquake relief.

Nicole Richie and partner Joel Madden step away from the studio, joining Joe Jonas outside for a friendly chat. Richie's father, Lionel (not pictured), who co-wrote the original tune with Michael Jackson, organized Monday's event along with producer Quincy Jones.

Nashville has come to Hollywood! Country star Julianne Hough gets between (from left) Sugarland stars Kristian Bush and Jennifer Nettles – with rocker Rob Thomas along for the ride.

Lionel Richie gets some support (literally!) from rapper Kanye West and RampB crooner Robin Thicke, who are clearly focused on their task at hand.

Music superstar Barbra Streisand gets a little hip-hop cred during a close encounter with Black Eyed Peas star Will.I.Am, who wrote a brand-new rap verse about Haiti for the "We Are the World" reboot.

Nick Jonas leaves his brothers behind and steps into the booth with pop star Enrique Iglesias.

And the cutest (and littlest!) performer is Harlow Madden, 2, who spent the star-studded session in her daddy Joel's arms. Lionel Richie, whose daughter Nicole joined Michael Jackson on the original 1985 recording, tells PEOPLE seeing his granddaughter in the studio was emotional. "It’s kind of surreal," he says. "And [it's been] 25 years! It went that fast." 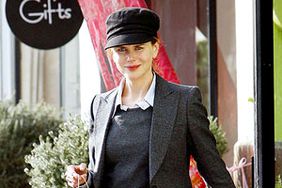