The Mortdecai star and actress got married in the Bahamas

After legally tying the knot at his Los Angeles home Tuesday, Johnny Depp and Amber Heard headed to his private island in the Bahamas for a second wedding celebration Saturday.

The guest list was kept very small, with only a few dozen of their closest family and friends looking on as they swapped vows under a white marquee decorated with flowers on the idyllic beach of Little Hall’s Pond Cay.

“Johnny’s private island is a tropical paradise. Wedding guests were treated to an amazing weekend that ended with a romantic beach ceremony,” a source tells PEOPLE. “Guests relaxed on the beaches, had fun snorkeling and enjoyed food cooked by private chefs. Everyone seemed to have the best time. It was a very celebratory vibe.”

Heard, 28, wore a traditional long-sleeved white wedding gown and a floor-length veil, while the actor, 51, donned a white tuxedo jacket and black pants.

The actress was flanked by several bridesmaids, including her sister, and Depp’s 12-year-old son Jack (with ex-girlfriend Vanessa Paradis) stood by dad (perhaps he was the best man?) in matching attire.

“The weather was perfect and the beach setting was gorgeous,” the source says. “The ceremony was beach casual and intimate, yet very romantic.”

Depp and Heard revealed their engagement in January 2014, and a friend of the actor tells PEOPLE he is “madly in love” with his new bride.

“She is a free-thinker and an independent woman who makes her own decisions,” the source says. “Her presence has changed his life.” 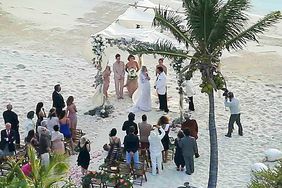