From Clay Aiken's doppelgänger to the crying cowboy, catch up with some of last season's most memorable rejects

Michael Sandecki
The Clay Aiken doppelgänger sang on last season's May 24 finale and got the surprise of his life when Aiken joined him onstage. But since his big moment, the Phoenix-based Sandecki (who got rejected at his first Idol audition) has changed his look so as not to be mistaken for Aiken. Still, the aspiring singer – who does clerical work for an online school – isn't giving up his dream. "I eat, live and breathe music, and I'm going to make it somehow," says Sandecki. "But now I just want to be Mike."

Brenna Gethers
After being kicked off Idol, the brash wannabe promised, "I will be talked about." Turns out she was right. Last summer, Gethers, 26, replaced the lead singer of the Bomb Squad, a funk-rock band that won an American Music Award for Best New Music in 2003. "I feel so grateful," says Gethers, a former health-care-firm coordinator who lives outside Boston. And her Idol reputation remains larger than life. "I get recognized every day. People think I was Top 3, (but) I only made it to Top 20."

Garet Johnson
Since getting booted from Idol, Johnson, 19, is making out just fine. "I've kissed, I don't know ... 25 girls, I'm guessing," he says. And before Idol? "Besides my mom?" he asks. "None." When he's not breaking hearts, Johnson works on his family's Veteran, Wyo., ranch. He's still hoping for a music career, but no rush. "I need more seasoning first," he says. "I don't need to be a big star yet."

Derrell amp Terrell Brittenum
The identical twins, 29, had their AI stint cut short when they got arrested (they used another man's identity to buy a car). They had to pay court costs and restitution and perform 96 hours of community service. Cooking for, feeding and, yes, singing to retirement-home residents taught them some better values, says Derrell. "Being a helping hand makes you feel really good inside," he says. Up next for the pair? The March release of their RampB CD Here I Am. 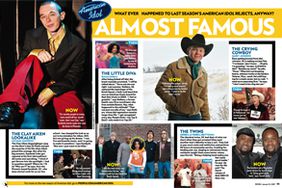