How 'The Office' Cast Gets Its Sugar Fix

From Steve Carell to Angela Kinsey, the actors on the NBC hit snack on mini donuts

The cast of The Office knows that the best comedy is served with sugar on top – especially if that sugar is in the form of a hot, fresh mini donut.

When Steve Carell, Angela Kinsey and the rest of the Dunder Mifflin Paper Company gang need an on-set pick-me-up, they turn to Shelley Beals, whom they know as the “Fry Girl.”

Beals, owner of The Fry Girl Inc., serves up fresh miniature-sized donuts on location, where she cooks up the treats and tops them with homemade flavored sugars. Flavors range from chocolate – Carell’s favorite to cinnamon sugar, which satisfy Rainn Wilson’s sweet tooth (and maybe even his grumpy TV identity, Dwight Schrute).

The desserts have the actors waiting on-set to get their fix. First in line? Craig Robinson, who snagged a bag of the powdered sugar assortment.

They’re such a hot commodity – literally – that cast members have to protect their bag of Beals’s goodies. At least that’s the story Mindy Kaling’s sticking to. She told the Fry Girl that her fellow castmates attacked and ate her first bag of doughnuts.

Or maybe she just wanted a refill.

Who has the biggest sweet tooth on set? “The Fry Girl doesn’t keep track and definitely doesn’t judge,” said a rep for Beals. “She knows how tantalizing her delicious mini donuts are!”

Beals’s has also catered her doughnuts on the sets of Weeds, Ugly Betty and NCIS.

Want to get a taste of what The Office cast is swooning over? Try Beals’s buttermilk donut recipe with an optional vanilla glaze.

Preparation
For the donuts, combine the buttermilk, eggs and sugar. Set aside. Mix together flour, baking soda, baking powder, salt, nutmeg and cinnamon. Add the buttermilk mixture to the dry ingredients and stir. Stir in the melted butter or shortening, and knead until a soft dough forms. Roll out dough on a lightly floured surface to approximately ¼-inch thickness. Cut with a 2-½-inch or large donut cutter. In a deep-fat fryer or electric skillet, heat oil to 375 degrees F. Fry the donuts on each side for about one minute or until golden brown. Drain on paper towels. Dip in powdered sugar glaze while hot and decorate with nuts.

For the glaze, combine the powdered sugar, margarine and vanilla in a mixing bowl. Mix well, and add just enough milk or water until the glaze is the consistency you desire (a thinner consistency will produce a thin glaze on the doughnuts, or a thicker consistency will be more like frosting). 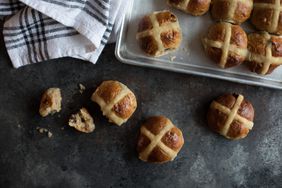 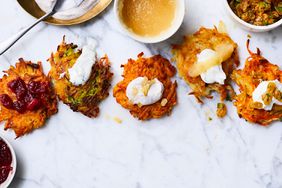 Chrissy Teigen Is Obsessed with This 'Absurd' Carrot Cake, and We've Got the Recipe 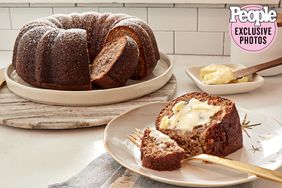 How to Make Pancakes Without a Recipe 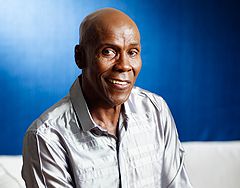 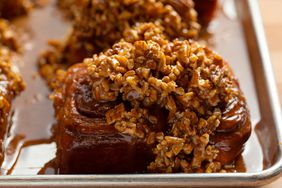 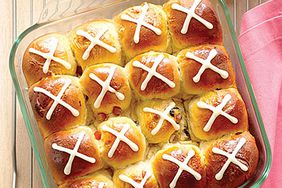