In less than a month, nearly two million people have watched the YouTube video of a 3-year-old girl named Cody crying about how much she loves Justin Bieber.

Thanks to Jimmy Kimmel, Cody now has a smile on her face.

On last night’s episode of Jimmy Kimmel Live!, the host surprised the little girl and her sisters Sierra, 8, and Cheyenne, 13, with a visit from the pop star, who was in L.A. to celebrate his 16th birthday. (The segment was taped on Friday.)

“They all knew we were going down [to the show] and didn’t know why,” their dad Tyler, tells PEOPLE.

Before the big moment, the family was seated in a dressing room backstage and Kimmel popped in to say hello. His cell phone rang, and he handed it to Cody, who discovered the boy she had tearfully proclaimed she wanted “to be one of her family” was on the line.

“All she did was put her hand over her mouth,” says her father. Then Bieber walked into the room. “[Cody] just looked at him and said, ‘I knew you would come.’ ”

After Kimmel’s cameras left, Bieber spent “probably a good 45 minutes” with the girls and their parents, “just hanging out.”
PHOTOS: Justin Bieber, Fanboy! His Pics with the Stars

He also serenaded Cheyenne, whose birthday was Feb. 25. “He sang ‘Happy Birthday’ to her, which was really nice,” says Tyler. “And then he kissed them all on the cheek.” The following day, the family visited Disneyland, courtesy of the singer.

And yes, there were tears – but not from Cody. “The two older ones did cry,” admits their dad. “They were star-struck.” 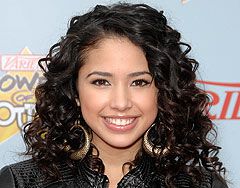