There's no place like Home for Rihanna, Jim Parsons and Steve Martin, who lend their distinct voices to DreamWorks' new animated film of the same name (out March 27), which focuses on an alien takeover and the girl determined to make things right.

Rihanna voices teen Tip, who, according to DreamWorks, "comes to understand that being different and making mistakes is all part of being human."

Meanwhile, Martin lends his pipes to alien commander Smek, who leads his followers, the Boovs, through their takeover of Earth.

… and he finds it with Rihanna's character Tip – for better or for worse!

Better call Maaco? In this still from the film, Tip can't believe what her new pal Oh has done to her mom's car.

But all the better for flying, er, driving through the air, we suppose?

The friends embark on what DreamWorks calls an "incredible global adventure."

THE AIR UP THERE

A visit from traffic cop Kyle (voiced by Mom's Matt Jones) seems to give the friends a moment of fright.

LEAVING IT ALL BEHIND

But it appears nothing can stop the pair when they really get moving.

Tip's mom Lucy (left) is voiced by none other than Jennifer Lopez. Catch Home in theaters on March 27. 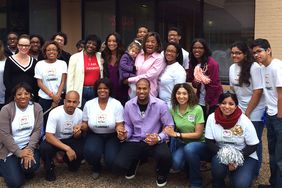