Ending speculation that she is having second thoughts, Hillary Rodham Clinton acknowledged today that she is seeking the Senate seat from New York. “The answer is yes, I intend to run,” she told supporters who had put the question to her at a meeting of the United Federation of Teachers in New York. She said a formal announcement will come after the first of the year. Mrs. Clinton has been under pressure from some New York Democrats to declare her candidacy and spend more time campaigning in New York, where the Clintons recently bought a home. Although the Clintons have said they intend to occupy the home in Westchester County, outside of Manhattan, once they leave the White House, the purchase was seen as an indication of the First Lady’s desire to run for office in the state. But, after a series of missteps in recent weeks (including kissing the cheek of the wife of Yasser Arafat, which ticked off New York’s Jewish voters), some New York Democrats were actually suggesting she skip the race. Advisers said today’s announcement was designed to head off other Democratic defections. Her likely challenger is New York City Mayor Rudolph Giuliani, who has already begun running anti-Hillary TV ads that show the infamous kissing incident.

Alec: No Hat in Ring 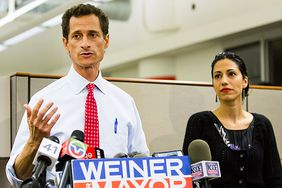