The latest batch of emails from Hillary Clinton‘s private server reveals she received requests for favors from several top Clinton Foundation donors – including U2 frontman Bono.

Among the 725 pages of correspondence released Monday by the conservative group Judicial Watch was an email that former Bill Clinton aide Ben Schwerin wrote to Clinton Foundation executive Doug Band and longtime Hillary Clinton aide Huma Abedin, to ask about an unusual request from Bono.

“Bono wants to do a linkup with the International Space Station on every show during the tour this year,” Schwerin wrote of the musician and activist, who has previously donated to the Clinton Foundation and helped with foundation events. “I’m trying to figure out who the best contact is to talk to at NASA or the congressional committee on science and technology. Any ideas? Thks.”

“No clue,” Abedin and Bland both replied.

But Politico reports that U2 later featured footage from astronauts on the International Space Station during shows on the North American and European legs of its U2 360° tour.

That same day, Band also emailed Abedin that John Fogerty, the former frontman of the rock band Creedence Clearwater Revival, was “looking to speak to someone w hrc.” (HRC, for Hillary Rodham Clinton, is how Clinton aides typically refer to her in writing. WJC is Bill Clinton and Chelsea is CVC.)

Abedin asked if Fogerty was “the singer dude” and Band replied yes.

Other donors who reached out to Abedin to request meetings and favors from the then-secretary of state include the Crown Prince of Bahrain and Casey Wasserman, a wealthy sports executive who had employed former President Bill Clinton as a consultant.

Abedin worked with Clinton and other government officials to determine how to respond to such requests. She ultimately helped schedule a meeting with Bahrain’s crown prince, who has donated millions of dollars to the Clinton Foundation, The New York Times reported.

But Abedin was hesitant when Band asked her to help obtain a visa for a member of the Wolverhampton Football Club, who had a criminal charge against him, as a favor to Wasserman.

“I get this now, makes me nervous to get involved but I’ll ask,” Abedin wrote.

The new email dump prompted GOP nominee Donald Trump to call for Clinton to be investigated by a special prosecutor.

“The amounts involved, the favors done and the significant numbers of times it was done require an expedited investigation by a special prosecutor immediately, immediately, immediately,” he said at a Monday rally in Akron, Ohio. “After the FBI and Department of Justice whitewash of the Clinton email crimes, they certainly cannot be trusted to quickly or impartially investigate Hillary Clinton’s new crimes, which happen all the time.”

Clinton’s email scandal remains an ongoing thorn in her presidential campaign, with the State Department set to release up to 15,000 more emails in the weeks leading up to the November election. 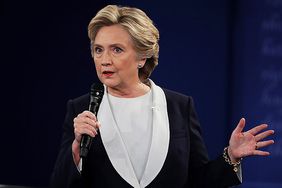