Inside a Contest Winner's 'Hamilton' Experience with Hillary Clinton: 'She Was Absolutely Warm'

"She was absolutely warm, and I got to hug her and kiss her on the cheek," contest winner Barbara Garcia says of Hillary Clinton

Barbara Garcia was enjoying Sunday dinner with a friend in Miami when she got the call that she was the sole winner of a trip to New York City to see Hamilton on Broadway. The highly coveted tickets were for a fundraising matinee for Hillary Clinton – and the presidential candidate herself would be in attendance.

“There was a subtle scream there,” she tells PEOPLE about her reaction to the news. “I don’t even remember eating.”

Garcia, an anatomy and physiology professor at Doral s West Coast Nursing University, entered the contest after a friend raved about the musical and sent her a Facebook link to enter. “Never in my wildest dreams did I think I would actually be the winner,” she says.

After securing someone to cover her Tuesday class, the professor and her plus one – her friend Jaime, who told her about the contest and was with her when she got the phone call – were flown to New York on Monday afternoon.

Watching the critically-acclaimed musical that swept this year’s Tony Awards with 11 wins was a momentous occasion for the Clinton supporter. “They walked us over to our seat and at that point my jaw dropped to the ground,” she says of being upgraded from a side view to front row center.

Top donors and big wigs may have been in the crowd, but Garcia remembers very little about who might have been in the audience with her during the show. “I was caught up in my moment,” she says.

Lin-Manuel Miranda, creator of Hamilton, introduced Hillary Clinton as the “45th President of the United States” before she graced the stage to address the audience. “When she walked out, she was glowing,” says Garcia.

If that moment weren’t big enough, Clinton stepped off of the stage and greeted her like an old friend – even using her nickname, “Barby.”

“When you get called by your first name by the future president of the United States, there’s a little something inside that happens where you kind of die, ” she says with laughter. “She was absolutely warm, and I got to hug her and kiss her on the cheek.”

Drop That Beat! Hamilton Creator and Star Lin-Manuel Miranda Freestyles for Us

She and her friend were whisked away to the wrap party after the show, where she met Miranda and shared how much she enjoyed the musical. “He is an absolute gem,” she says of the actor and playwright. Garcia also spent more time with Clinton, and took the opportunity to chitchat with the former Secretary of State about why she’s “with her.”

“I told her I’m the daughter of Cuban immigrants,” she says. “That’s part of the reason I’m a huge Hillary supporter – because she embodies all of the ideals that I have in terms of immigration and education. I told her, ‘We have to seal the deal now’.”

By 7 a.m. on Wednesday, she was heading back to work in Miami – but not before giving her mother the entire run-down about catching her first Broadway show in New York with Hillary Clinton. 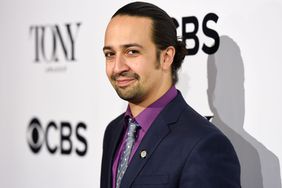 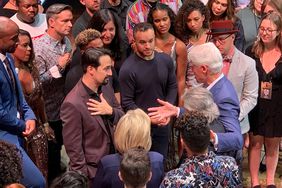 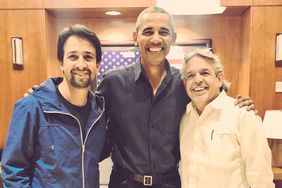 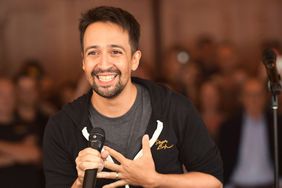 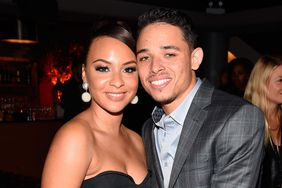