Hilary Duff has been aggressively stalked by two men over the last six weeks and fears for her life, according to court documents filed Thursday on behalf of the singer-actress in L.A. Superior Court.

Duff, 19, claims the two perpetrators are a 19-year-old immigrant from Russia, known only by the first name Max, and his roommate, David Joseph Klein, a 50-year-old self-proclaimed celebrity photographer.

According to the documents, the two men have made repeated contact with Duff’s manager, showed up at Duff’s mother’s house, a Hollywood venue where her boyfriend Joel Madden, 26, of the band Good Charlotte performed last month, and even an L.A. market the couple frequents.

Max allegedly has made claims that he intends to purchase a weapon and “has threatened to kill himself and to engage in dramatic actions” to get Duff’s attention because he “believes they belong together.”

The documents also state that Max emigrated to the U.S. two years ago with the sole intention of entering into a romantic relationship with Duff and that he would “remove enemies” who may stand in his way, namely her boyfriend, Madden.

Duff, claiming “substantial emotional distress,” and her boyfriend are requesting that both Max and Klein stay 100 feet away from the couple and their family members.

Both Max and Klein were unable to be reached for comment. 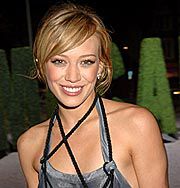