"She was just full of confidence and joy – a real delight to talk to," the last hikers to see Gerry Largay alive said of her

The 66-year-old, an experienced outdoorswoman nicknamed “Inchworm,” set out with her backpacking buddy Jane Lee for a “bucket list” adventure hike from Harpers Ferry, West Virginia, to Maine’s Mount Katahdin in April 2013, according to the Boston Globe.

As the two were entering New Hampshire’s White Mountains, Lee was forced to leave the trail due to a family emergency. Gerry insisted on continuing on the trip alone.

When she didn’t show up to their scheduled meeting place, George reported his wife missing on July 24, 2013. A massive, frantic search ensued over a 26-month period for the missing Brentwood, Tennessee, native.

Gerry’s body was discovered more than two years later in October 2015 near Maine’s Redington Township. She died in her sleeping bag, inside a zipped tent near a U.S. Navy-owned property. A medical examiner determined the cause of death to be starvation and environmental exposure, reports the Associated Press.

Officials found a plastic bag in the tent containing a cellphone with unsent text messages and a journal documenting Gerry’s acceptance that she was going to die, according to newly released investigatory documents obtained by AP.

“When you find my body, please call my husband George and my daughter Kerry. It will be the greatest kindness for them to know that I am dead and where you found me – no matter how many years from now. Please find it in your heart to mail the contents of this bag to one of them,” one of Largay’s haunting journal entries, dated August 6, 2013, read.

Gerry suffered from a recurring back problem and couldn’t carry the 35-pounds of supplies most hikers shoulder during long treks. George, who knew hiking the Appalachian Trail was his wife’s longtime dream, agreed to meet her and Lee at various points along the trip to replenish their supplies, reported the Boston Globe in 2014.

During the summer of 2013, George – who chose the trail-moniker “Sherpa” – met the women multiple times, hiking an hour past trailheads to meet his wife and Lee. They would then spend the night at motels to shower and recuperate, according to the outlet.

The last time George saw his wife was on Sunday, July 21, 2013. Gerry was taking on an extra tough route – 32 miles over seven mountain peaks. He stayed with her longer than normal, because he knew he wouldn’t see her for a while.

“She was just full of confidence and joy – a real delight to talk to,” Rust told the Boston Globe in 2014.

The trekkers were impressed with Gerry’s passion for life and love for the outdoors.

Rust and Clark insisted on taking a picture of Gerry who woke up early the next day – smiling and wearing a striking red jacket – to begin her 22-mile hike to meet George in two days.

It was the last photo ever taken of Gerry.

When George reported Gerry missing, an intense search effort by volunteers, police and warden services continued for several days, but was suspended on July 30, 2013, according to the Portland Press Herald.

“There were many leads over the next 26 months, ranging from persons of interest for possible criminal activity related to Gerry’s disappearance, identity theft involving Gerry’s personal information, geographic information by psychics, sightings in different states All of these leads were investigated with our investigative partners,” Lt. Kevin Adam wrote in a November 2015 report after Gerry’s body was discovered, the publication reports.

Adam met with George and other members of Gerry’s family on October 18, 2015, at the site where she was found – about two miles from the Appalachian Trail.

“After everyone finished looking around the campsite, the family left a cross where the tent was located along with several family mementos,” Adam wrote in his report.

Haunting unsent text messages and journal entries that were recently released reveal that Gerry had tried to get in contact with George after she got lost.

“In somm trouble,” she texted the day she left the trail on July 22. “Get of trail to go to br. Now lost. Can you call AMC to c if a trail maintainer can help me. Somewhere north of woods road.”

Another text attempt read: “Lost since yesterday. Off trail 3 or 4 miles. Call police for what to do pls.”

In a 2014 interview, a little more than a year after his wife’s disappearance, George said he was coming to terms with his wife’s fate.

“I no longer wake up thinking about Gerry’s disappearance every morning,” he told the Boston Globe in December 2014. “Now it takes a holiday or an anniversary or a certain Neil Diamond song on the radio.” 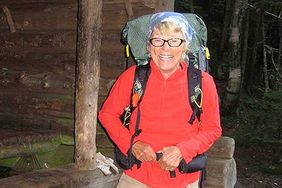 Hiker Who Died After Getting Lost on Appalachian Trail Left Journal for Loved Ones: 'When You Find My Body, Please Call My Husband'