Think being an actress over 40 is a challenge? Try having a baby, says Helena Bonham Carter.

When the actress, 41, and her husband, director Tim Burton, 49, decided they wanted a sibling for their 4-year-old son, Billy Ray, the couple did battle with some conventional – and unconventional – fertility treatments.

Fearing that, like most women over 40, she wasn’t ovulating regularly, Bonham Carter, a devotee of alternative therapies, decided first on a fertility drug called Clomid to stimulate egg production.

“I had a terrible reaction to it. It turned out I was ovulating anyway,” the actress told Britain’s Daily Telegraph newspaper Monday.

“It stressed me out beyond belief. Hormonally, I was all over the shop and I got really low emotionally. Lots of people don’t have that reaction, but on the internet I found a Clomid Club, with people who react to the stuff discussing it online,” she said.

After going to a North London acupuncturist who supplied a variety of teas to “build my strength up,” Bonham Carter, also tried Tui Na (literally “push and grasp”), an acupuncture-related Chinese massage for patients who prefer to avoid needles.

Nature had Other Plans

But with her biological clock ticking loudly in her ear, she realized Oriental medicine wasn’t the solution she’d hoped for – and the next viable option was In vitro fertilization.

“We might have gone for a round of IVF,” Bonham Carter said. “There was an argument for just having one child, because we thought if that’s the way it’s meant to be, so be it.” But the pregnancy came naturally, under the intense pressure of making a movie musical.

While being directed by Burton alongside Johnny Depp in the title role of Stephen Sondheim’s musical Sweeney Todd, Bonham Carter discovered she was pregnant .

“I was working so hard at the time,” she recalled. “The first three months being pregnant while filming, I felt totally spaced out.”

“You do need to multi-task with acting. You’ve got to remember your marks, your lines, singing, everything, and actually – you have no brain! Suddenly your own brain is growing another person’s brain, so yours goes defunct,” said Bonham Carter who is due in December. “It wasn’t ideal, but then I was so happy to be pregnant.” 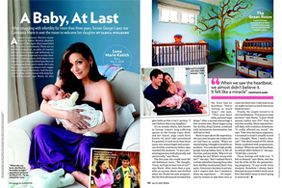 A Baby, at Last

Jools Oliver Shares Her Fertility Struggle, Hopes For Another Girl