From red carpet PDA to dressing up as dragons, relive the couple's sweetest moments before the split

One month after the birth of her daughter Leni (dad is Klum's ex Flavio Briatore), Heidi Klum makes a stylish statement with new beau Seal at the June 2004 CFDA Awards. "I met him in a hotel lobby in New York City and he came in just from the gym," the supermodel told Oprah of falling for the bicycle shorts-clad singer. "And I pretty much saw everything – the whole package."

It's getting serious! The PDA-happy pair enjoy a major lip-lock at the September 2004 World Music Awards afterparty, just three months before Seal pops the question. "I proposed on Dec. 23 at 14,000 feet in Whistler, B.C., in uncharted terrain on a glacier, in a natural snow cave, in an igloo built just for the moment," he told PEOPLE.

The supermodel and her fiancé play dress-up in February 2005, donning dragon costumes for a Carnival parade in her hometown, Bergisch Gladbach, Germany. That May, the pair head to Mexico, where a five-months pregnant Klum marries the musician before 40 guests at Seal's Costa Careyes home. Son Henry arrives Sept. 12.

Though her show, Project Runway, fails to win at the August 2006 Emmy Awards, Klum – who is expecting the couple's second child together – appears to have landed an even bigger prize. "I don't know why I got so lucky," Klum said of meeting her Mr. Right. "I have to pinch myself often and say, 'Is this just a dream?'"

Seal and his very pregnant wife make like Eve and her apple at Klum's annual Halloween party in 2006. "I thought it was a fun way to come up with a 'wow' costume that worked with my belly!" she told PEOPLE of her ensemble.

The proud parents show off son Johan, born Nov. 22, in a December 2006 family photo. "It's never boring or quiet in our home," Klum told PEOPLE, "but we are truly blessed to have three healthy children."

Talk about making beautiful music together! Klum and Seal pair up at the November 2007 Victoria's Secret fashion show, where they perform "Wedding Day," a song he wrote about their May 2005 nuptials. "Family, my wife and children, that's my reason for being," he said of the tune. "I am finally in a content and happy place to the point where I feel like I need to sing about it."

Say cheese! "What first attracted me to her was the kindness in her smile that prompted me to feel that I hadn't seen anyone more beautiful," Seal, posing in Paris in August 2008, said of his lady love.

The proud parents of four – Leni, Henry, Johan, and daughter Lou, born Oct. 9, 2009 – enjoy a date night out at the August 2010 Emmys. "When we're home, we're cooking and doing things with the kids, driving them to school," she said of family life. "We do the things that everyone has to do."

Seal steals a smooch at the September 2011 Emmys. "He is a supersexy, hot kisser," Klum said of her husband, with whom she renewed vows every year. "It's so special to us, something we love and something our children have gotten accustomed to," she said of the tradition. "It's like, 'Hey, Mom and Dad love each other and they get married every year!'"

Also in September, the silly couple get into the Halloween spirit by wearing mouse-eared witches' hats during a visit to Disneyland. "In our house it's Halloween all year round," Klum said. "It's not as scary but [my kids] love dressing up. Look at their mom. She's always dressing up."

The smiling couple seemed as close as ever during a Christmas 2011 getaway in Aspen. Three weeks later, she attended the Golden Globe Awards alone, before officially telling PEOPLE on Jan. 22 that the twosome were separating. 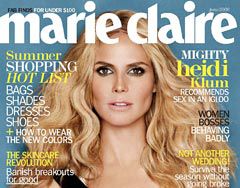