The actor, who played Mr. Cunningham on the sitcom, died at his Palm Springs, Calif., home

Tom Bosley, the folksy father of Richie Cunningham on the ’70s sitcom about the ’50s, ABC’s Happy Days, died Tuesday in his Palm Springs, Calif., home. On Oct. 1, he had turned 83.

The actor died after a brief battle with lung cancer.

Before finding fame on the small screen, Bosley won a Tony for starring as the beloved New York City Mayor Fiorello LaGuardia in the Pulitzer-Prize-winning 1959 musical Fiorello!. He also made a memorable mark in the 1964 Peter Sellers cult comedy The World of Henry Orient, as the too-understanding husband of Angela Lansbury’s character.

After Happy Days, he would frequently costar with Lansbury on her CBS series, Murder She Wrote.

Reacting to Bosley’s death, his Happy Days costar Henry Winkler expressed his sadness, telling Los Angeles’s KNX-1070 News Radio, “I’m in shock, I really am. I spoke to him just a few weeks ago and he seemed to be getting his strength back.”

Born in Chicago, Bosley was the younger son of a real estate broker father and a former concert pianist mother. “We were fairly wealthy until the stock market crashed,” he told PEOPLE in 1979, during the Happy Days craze. “When I was 2, my father lost all his money.” His parents divorced nine years later.

Bosley joined the Navy in 1945 at 17 (“I’m the only guy I know who went in as a seaman and came out a seaman”), then enrolled in pre-law at DePaul University. In his first year, he switched to acting.

After stock theater in Illinois (with fellow aspirants Paul Newman and Geraldine Page), he flipped a coin in 1950 to decide between New York and Los Angeles. New York won.

For nine years before Fiorello! he acted off-Broadway and in summer stock while working menial jobs to feed himself. Movie and TV roles followed, and in recent years, whenever there was a Happy Days reunion, he could always be counted upon to appear – and tease his TV son, Ron Howard, about not casting him in his movies.

Coincidentally, Bosley’s death comes only a few days after that of another iconic ’50s TV parent, Barbara Billingsley, of Leave It to Beaver.

In lieu of flowers, the family asks that donations be made to the American Cancer Society.

Even After His Beloved Wife's Death, Tom Bosley Still Finds Life Has Its Happy Days 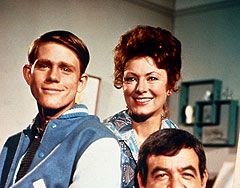 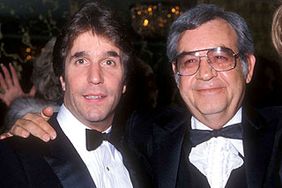 Tom Bosley Mourned by Henry Winkler on Eve of Funeral 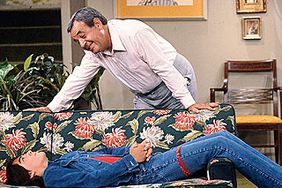