Halle Berry Opens Up About Feeling 'Guilty' After 3 Divorces: 'I've Suffered a Lot of Pain and Anguish'

Halle Berry is reflecting on the pain of going through three failed marriages.

The actress, 50, participated in a candid Q&A at the 2017 City Summit and Gala in Los Angeles on Saturday where she opened up about the emotional toll of going through several divorces and other failed relationships, according to Entertainment Tonight.

“I have learned to deal with three failed marriages, which has not been easy, especially when there’s children involved,” the actress admitted.

Berry has two kids from previous relationships — 3-year-old Maceo with latest ex-husband Olivier Martinez and 8-year-old Nahla with ex-boyfriend Gabriel Aubry. The actress was also previously married to Eric Benét from 2001 to 2005 and David Justice from 1992 to 1997. Her marriage to Martinez was finalized in December.

Going through these breakups have led to disillusionment for Berry, who says that women “go into marriage thinking it’s going to last forever and that this is our prince on a shiny horse. That’s what fairytales taught me as a kid.” But the actress no longer believes in the fairytale love, saying she’s “anti-fairytales today.”

“But we go in there with that hope, so when it falls apart it feels like a huge failure and a huge disappointment. I’ve often felt guilty and responsible. I’ve suffered a lot of pain and anguish,” she added.

But the heartbreak has led to Berry focusing on being a mom to her two young kids. “Right now, being mom is my most important job and I now know that everything I do, everything I say and everything I offer them is really important,” the Oscar winner said. “I say lots of things, but I think what’s more important is that my children watch what I do. I’m more mindful of how I live my life and what they see me do.”

Berry also opened up about part of what she does to instill good values in her children, explaining that she is heavily involved with the Jenesse Center, a domestic violence prevention center, where she brings her kids so they are mindful of helping people less privileged than them. The family has a started a yearly tradition of donating toys to those in need before the children get their Christmas presents. The actress proudly admitted that it was already making a impact on Maceo and Nahla.

“They get so much out of handpicking each one of those toys and giving that to some other child, telling that child a story and making sure they’re going to take care of it,” she shared. “It makes them feel really good about themselves.” 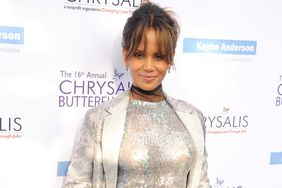 Halle Berry Posts Cheeky Instagram Amid Pregnancy Rumors: 'Can a Girl Have Some Steak and Fries?'