Gyllenhaal, Sarsgaard Have a Girl

This is the first child for Gyllenhaal and Sarsgaard

Maggie Gyllenhaal and her fianc , Peter Sarsgaard, have welcomed their first child, a rep for the actress confirms to PEOPLE exclusively.

The baby girl, who was born Tuesday afternoon in a New York City hospital, is named Ramona.

Gyllenhaal, 28, and Sarsgaard, 35, announced their pregnancy and engagement exclusively to PEOPLE in April.

An onlooker who spotted Gyllenhaal at the Canc n airport that month told PEOPLE, “She looked really happy. Little kids would run by and she would smile and giggle. I thought, either she’s the nicest person in the world or she has major baby lust!”

Saarsgard’s Kinsey costar Laura Linney tells PEOPLE of the new father, “He’s going to be a magnificent dad. That is a lucky child, those are lucky parents. And I am very happy for all of them!”

The couple have been together for more than four years. They costarred in 2003’s In God’s Hands, a low-budget feature produced by Steven Soderbergh that was never released.

Gyllenhaal made her name in the 2002 movie Secretary, and has appeared in more than 20 films, including World Trade Center, Trust the Man and Donnie Darko, which starred her brother, Jake Gyllenhaal.

Sarsgaard has also acted with Jake, in the war movie Jarhead. His breakthrough role was in the 1999 film Boys Don’t Cry and he earned a Golden Globe nomination in 2004 for Shattered Glass. 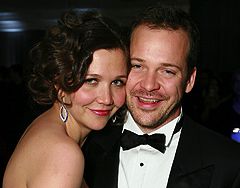