The Oscar-winner confesses that celebrity news is "very addictive"

“There’s obviously an appetite for gossip,” she told Britain’s Daily Mail Weekend Magazine. “It’s very addictive to see what people are doing and wearing and saying – and who is breaking up.”

The actress went on to describe the outrage of an unnamed friend who had been dating another celebrity and read an inaccurate item about the romance in a New York tabloid.

“Then he turned the page of the same newspaper and said, ‘My God, have you seen who’s together?'” she told the magazine. “So we’re all at it, aren’t we?”

But Paltrow, 35, is quick to quash rumors of any trouble in her marriage to Coldplay’s Chris Martin. Although they are rarely photographed out and about, she explained, “We’re not into doing stuff in public together.”

Away from the cameras though, she insisted, it’s a different story.

“I love the house,” Paltrow said of the North London home the couple bought from fellow actress Kate Winslet and her husband, director Sam Mendes.

Paltrow – mother to daughter Apple, 3, and son Moses, 1 – also admitted she’s thinking of expanding her family. In four years, she dreams of having “two-in-a-row, really quick again,” while Martin would like to adopt.

So which will it be? The actress, who recently finished filming The Good Night with her brother Jake, told the Mail, “I’m open to anything.”

Gwyneth Paltrow thinking of adding to her family 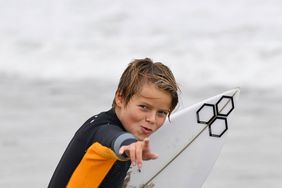 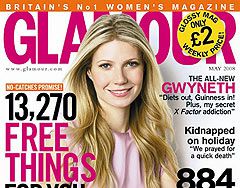 Gwyneth Paltrow Has a Boy