Is Gwen Stefani prepping for a fun celebration this weekend?

The trendy star paired a striped V-neck sweater with plaid capris, and topped off her look for the casual outing with a signature red lip.

Earlier this month, Stefani set the record straight about all the “gossip-y, weird stories people make up” about her relationship with Shelton.

“Let’s just take it one day at a time,” she told 94.7 Fresh FM’s “The Tommy Show” when asked about the possibility of a wedding in the near future. “Everything’s crazy right now so no, absolutely not.”

Stefani also brought along her niece, Stella, to the amusement park, and the whole clan was seen riding the new Ghostrider ride several times as well as picking up candy and taffy. 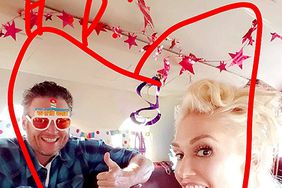