Gov. Jesse Ventura will not be ferried about in a luxury sedan like those wimpy other governors. The former pro wrestler has chosen a full-size luxury sport utility vehicle, the Lincoln Navigator, as his official car. He announced the choice Tuesday after visiting the assembly line in St. Paul MN. “I just felt I wanted something comfortable and practical,” he said, noting his state’s snowy winters. He said he needs the extra room because he’s bigger and taller than most, and joked that he wanted extra strong shocks “for running over reporters.” “They’ve assured me I can be accommodated,” he said with a smile. 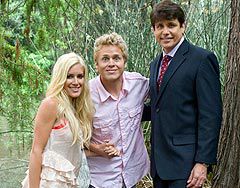 WEEK AHEAD: Pam & Tommy Take Over