Can’t get enough of “Gladiator” star Russell Crowe? You’re in luck. The New Zealand native is bringing his rock band, 30 Odd Foot of Grunts, to the U.S., reports New York’s Daily News. The band has been together since the early ’80s, with Crowe, 36, as its frontman. (On the official Gruntland Web Site, Crowe is described as being 9 1/2 years old, with hobbies that include “breeding psychologically disturbed cattle.”) In July, Crowe’s Grunts, who’ve mostly confined themselves to playdates Down Under, will go to Austin, Tex., to record their fourth album. They are also expected to perform some live gigs there. 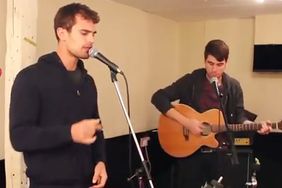