From Oprah & Drew to Brad & Angelina, look back at the stars whose good deeds shone in 2008. By Cara Lynn Shultz

Now that's a "big give!" Appearing on the Oprah Winfrey Show in March, Drew Barrymore announced her $1 million donation to the World Food Programme to help feed children in Africa. "I have seen with my own eyes what a difference a simple cup of nutritious porridge can make in a child's life," the actress said. She couldn't have picked a more appropriate spot for her announcement: This year, Winfrey was named the most charitable celebrity in the U.S., having donated more than $50 million.

The actor teamed up with President Bill Clinton in March to break ground on his Make It Right project, which rebuilds homes in the lower ninth ward of New Orleans, which was devastated by Hurricane Katrina. "We hope to see a huge change here in the next six months," Pitt said, returning to city throughout the year to check on the site's progress.

Shortly after giving birth to daughter Nahla Ariela, Halle Berry suited up for the 15th Revlon Run/Walk, held a day before Mother's Day in L.A., to raise money for cancer charities. At the event, she spoke about her doctor, whose wife was battling breast cancer while pregnant. "His resilience and his wife's resilience just reminded me of the courage that it takes to survive this disease," she said. "There are so many survivors out there right now, I want to congratulate you."

The Oscar winner, who was appointed U.N. Messenger of Peace in recognition of his work to bring attention to "crucial international political and social issues," tours the UNAMID headquarters in El Fasher, North Darfur, in late January. Following his visit, the actor addressed the crisis in Darfur – particularly the need to properly equip the peacekeeping force in the area. "Give them the basic tools for protecting the population [and themselves]," he told the press, "or have the decency to just bring them all home."

As the Avon Global Ambassador, Reese Witherspoon traveled to Japan in June, taking part in a traditional Japanese tea ceremony, where she met women who are breast cancer survivors. "I feel a great responsibility in my own life to give back to society," the actress has said.

The longtime environmental champion – who directed and produced the award-winning global warming documentary The 11th Hour – launched the first "green" credit card (made of environmentally friendly materials) in Hong Kong this past March. The HSBC card only uses digital bills to cut back on paper waste.

The soccer star spends his time off the field for a good cause, touring Sierra Leone in January to bring international attention to child survival. Beckham, who is a UNICEF Goodwill Ambassador, stopped by a health clinic near Makeni – where he visited with patients and even administered a polio vaccine to a newborn. "We can't turn a blind eye to the tens of thousands of young children who die every day in the developing world, mostly from causes that are preventable," Beckham said.

The January birth of daughter Harlow Winter kicked off a yearlong charitable effort for the couple's Richie-Madden Children's Foundation. In addition to campaigning for aid for typhoon-ravaged Myanmar, the twosome launched a gift registry for moms in need and raised $10,000 for a playground at an L.A. shelter with their Text CHILD to 90999 campaign. "This past year, philanthropy has opened my eyes to so much need and so much beauty," Richie wrote on Madden's blog. "I have also realized how easy it is to help, and how rewarding it feels to be able to make a positive difference in someone's life."

As spokeswoman for the PADRES Contra El Cancer – an organization helping economically disadvantaged, Spanish-speaking children and families – the Desperate Housewives actress accepts a $200,000 donation from ATampT in March to benefit the organization. "The money ATampT raised will help us continue supporting families coping with the devastating effects of childhood cancer," Parker said.

THE 'JUST STAND UP' SINGERS

The actor and music superstar got their hands dirty in October, showing up to help pack boxes for a Feeding America event in San Francisco, which provides nutritious food for more than 25 million Americans annually.

Arguably one of the biggest champions for the disadvantaged, the Oscar winner – and goodwill ambassador for the United Nations High Commissioner for Refugees – traveled to Iraq in February with Undersecretary of State Paula Dobriansky to learn more about the humanitarian crisis. Following her visit, Jolie wrote an op-ed article urging the U.S. to help Iraqi refugees, saying, "We should step up our financial and material assistance." 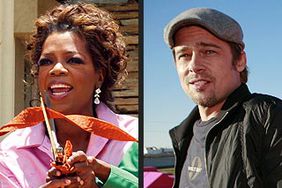