Gill Backs Away from Chicks Support

Last week, country superstar Vince Gill rose to the defense of Chicks lead singer Natalie Maines, 28, who famously told a London audience right before the war was launched in Iraq, “We’re ashamed the President of the United States is from Texas.”

The repercussions were felt nationwide, as radio stations pulled the Chicks off the air, sales of their CDs dropped and a mere mention of the Chicks brought up a chorus of boos.

“It’s pretty imperative that I communicate that I held the completely opposite view of Natalie Maines,” Gill told the Tennessean newspaper. “The troops and the president don’t have a bigger supporter than me.”

According to Launch.com, the Chicks backlash continues. In a recent poll conducted by New Media Strategies, 1,200 online country music fans said that they are 58 percent less likely to purchase a Dixie Chicks CD.

Furthermore, 75 percent added that they were embarrassed that the Dixie Chicks are from Texas.

The Chicks kick off their Top of the World tour on May 1 in Greenville, S.C. 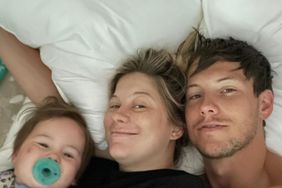