Expect "a lot of badass-ness," says the model

It’s T-minus two days until Taylor Swift‘s “Bad Blood” music video drops – and one of the clip’s stars, Gigi Hadid, is spilling on what we can expect.

“A lot of badass-ness – just the craziest thing you will ever see,” the model told PEOPLE at Thursday’s Maybelline New York 100-year anniversary party in N.Y.C. “I can’t say much, but it’s gonna be epic.”

So what was it like on set with all these strong women?

“It’s just amazing that Taylor has the self-confidence and the confidence in her friends and generation of women that she loves to empower other people, and I think that that’s what this is about,” says Hadid. “The song ‘Bad Blood’ is kind of a play on not creating bad blood with the people around you, and it’s cooler to be nice than to be mean.”

As for the character Hadid is playing, Slay-Z: “I’m obsessed with Beyoncé, and it’s a play on Jay Z and using the word ‘slay’ because slay. Hashtag-slay!” adds Hadid with a laugh. 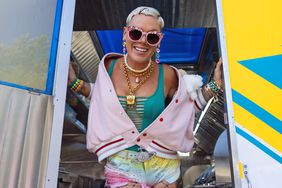