George Lucas is following the Force – right down the aisle.

The Star Wars director, 68, is engaged to DreamWorks animation chairman Mellody Hobson, a rep for Lucasfilm confirmed to The Hollywood Reporter on Thursday.

Hobson, 43, has been dating Lucas since 2006. This will be her first marriage and Lucas’s second; he previously was married to film editor Marcia Lou Griffin. The exes adopted a daughter Amanda before their 1983 divorce. Lucas went on to adopt two more children.

Lucas’s fiancée is also a contributor to Good Morning America‘s financial segments and has received many honors, including a 2002 listing as one of Esquire‘s “Best and Brightest” in America.

Lucas has made headlines of his own, recently donating to an education foundation much of the $4 billion from his sale of Lucasfilm to Disney.

According to THR, Lucas said at the time, “As I start a new chapter in my life, it is gratifying that I have the opportunity to devote more time and resources to philanthropy.” 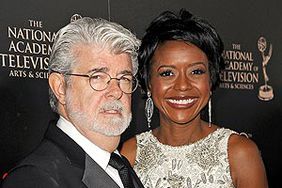