The President and First Lady talk about the war, the future and their marriage. Plus: President Bush answers your questions

The war, the elections, the GOP scandals: During these difficult times, the President and First Lady talked to PEOPLE about remaining focused on what they hold dear – family, country and one another.

By many measures – the progress on the war, the elections, poll results – it’s been a rough year. Do you feel that way? What’s your take on it?
THE PRESIDENT: I think it’s been a very difficult year in Iraq – for our troops, for the families of the troops, for the Iraqi people. And it’s been difficult for the American people, because success in Iraq has been slower coming than any of us would like. And so the task at hand now is to come up with a new way forward. I think most Americans fully understand the importance of success; they’re wondering whether we have a plan to succeed. It’s my job to listen to a lot of opinions and come up with a strategy that says we have a plan.

Did you think progress would be further along at this point?
THE PRESIDENT: I did. The reason it has been slower is because of the sectarian violence that was caused by outside forces. Now the task is to empower the Maliki government so that they can stop the violence to help them achieve the stability that 12 million Iraqis wanted when they went to the polls (in December 2005). There have been some remarkable achievements, but it is a very tough time now in Iraq.

Nearly 3,300 U.S. servicemen and women have been killed in the Iraq and Afghanistan operations – more than the number of Americans killed on September 11. Is democracy in Iraq worth the death toll?
THE PRESIDENT: If I didn’t think removing the Taliban from Afghanistan and helping this young democracy in Iraq after we removed Saddam Hussein were worth it, I wouldn’t have our troops there. Success in Afghanistan and Iraq, in Lebanon and elsewhere in the Middle East, is vital to the security of your children and your grandchildren. This is a long-term ideological struggle to protect future generations of Americans.

This year, we invited readers on our Web site to ask you questions. Here’s one:
Nina Frazier of New Braunfels, Texas, asks: If you believe in the war, why didn’t you encourage your own daughters to fight for your country? Or did you?
THE PRESIDENT: I believe Americans can contribute to the security and well-being of our country in a variety of ways. That’s why we have a volunteer army. What we say to young people is that if you want to serve your country you can do so in the military, or you can do so by teaching children in inner-city Washington, D.C., like one of our daughters did. Or you can help form education programs in New York City, like our (other) daughter. There are all kinds of ways to serve.

Nancy Pelosi shattered Congress’s glass ceiling by becoming the first female Speaker of the House. Do you think there’s anything a woman would do differently with the Presidency?

I think it depends on the individual, but there’s no doubt in my mind a woman could do the job.
Mrs. Bush: I agree. But it isn’t easy to live here. Dr. (Condoleezza) Rice, who I think would be a really good candidate, is not interested. Probably because she is single, her parents are no longer living, she’s an only child. You need a very supportive family and supportive friends to have this job.

The White House family had some happy news this week: Mary Cheney, the Vice President’s daughter, is pregnant.
THE PRESIDENT: The Vice President took me aside and gave me the good news. He and his wife, Lynne, are very happy for Mary.

You said in 2005 that ideally “a child is raised in a married family with a man and a woman.” Knowing Mary and her partner, Heather, do you still think that?
THE PRESIDENT: I think Mary is going to be a loving soul to her child. And I’m happy for her.

Many readers asked how you handle stress.
THE PRESIDENT: I pray daily. I exercise nearly daily, and I’ve got a loving wife who provides a comfortable, warm place for me to come home to.

Mrs. Bush, how do you feel when you hear some of what’s said about your husband? Are there moments that sting?
Mrs. Bush: Sure, yes. I don’t like that. But we’ve been involved (in politics) for years.

Is it worse today than in the past?
Mrs. Bush: When you go to the Lincoln Library in Springfield, Ill., and see what political cartoons and pamphlets said about President Lincoln, you see that it’s not worse. People are the same no matter what generation.

A lot of readers asked how you shut off the day’s events. Do you ever take sleep aids?
THE PRESIDENT: Generally not. But occasionally when I travel, I’m expected to get on an airplane and fly eight hours and pop out and be fresh and diplomatic and on message. If I’m having trouble sleeping, I’ll take a sleep aid. But I must tell you, I’m sleeping a lot better than people would assume.

Do you ever need anything more than a cup of coffee to stay sharp?
THE PRESIDENT: I have a couple of cups in the morning, and drink a lot of water. Hydrating helps. There are ways to maintain your health, and one is exercise. I believe prayer is very important; others don’t, but I do. I don’t drink alcohol. I can remember when I used to drink, I had trouble sleeping at night.

Favorite book of the year?
THE PRESIDENT: Team of Rivals, about Abe Lincoln, by Doris Kearns Goodwin.

Nichole Grimm of Waynesboro, Va., asks: After being married for almost 30 years, what are the little ways you keep surprising each other to keep your marriage alive?

I hope mine is humor, that I’m able to joke and laugh. Laughter is an important part of a healthy lifestyle. This is a town that’s not laughing a lot lately.
Mrs. Bush: We’ve done the same thing since we first got married. We wake up in the morning and drink coffee and read the newspapers. We like to go to bed early. Those quiet times that we’re together at the end of the day give us the most comfort with each other.

Angela Roy wrote from an APO address in Europe: What are the craziest things you ever gave each other for Christmas?
Mrs. Bush: I think George would say those sweaters that I give him every single year – which I’m not giving him this year. The best gift he ever gave me was when I opened a present under the tree and there was a little porcelain library. It was the library at SMU, my university. (It represented) a beautiful garden and walkway that leads into the library there. He had given it as a gift to my university. That was, by far, the most moving gift he ever gave me.

Are your daughters coming home for Christmas?
Mrs. Bush: They are. Jenna is working with an international organization in Central and South America about education policy. And Barbara is working for a museum in the education department.

Rena Dillard of Nashville asks: Do you have a favorite Christmas memory of them as little children?
Mrs. Bush: I love to tell the girls this story. They would always help me decorate the tree, and then we’d have hot chocolate. Once when they were really little, I said, “Sit under the tree” – and it makes me want to weep – “and I’ll go make the hot chocolate.” (The First Lady’s eyes fill with tears.) And I came back and they were so literal. They were squished under the branches, sitting way back by the trunk of the tree waiting for their hot chocolate. I’ll never forget those precious little babies under the tree.

Suzanne Young of Des Moines asks: What are your plans for contributing to society after the end of your presidency?
THE PRESIDENT: Tell Suzanne that I’ll be thinking about that after my presidency. I’ll be active. There’s a lot of really good initiatives we started here, such as battling HIV/AIDS on the continent of Africa, or dealing with malaria, or Laura’s literacy initiatives, and the Freedom Agenda. I’ve got so much on my mind, and this job is so exciting that it’s really hard to settle down and plan the next 10 years of our life.

Our Year in the White House

On the Spot in Iraq 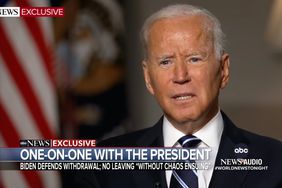