While he’s not nominated for an Oscar this year, George Clooney did take home the French equivalent of the Academy’s golden statue at the César ceremony.

Touted beforehand as “the most charismatic actor of his generation,” the Ocean’s Eleven star and his wife Amal, pregnant with their twins, brought Hollywood glamour to Paris at the Salle Pleyel on Friday. Dressed in his signature black Armani tuxedo and bow tie, Clooney looked dashing next to his wife, who showed off her baby bump in a fitted white gown tapered with an ombré of ostrich feathers.

The father-to-be was honored with a career award at the ceremony, along with French film legend Jean Paul Belmondo, who also received a Lifetime Tribute during the evening.

After a lengthy clip real of his greatest hits, Clooney was called onstage by host Jerome Commandeur. Greeted with a standing ovation, Clooney thanked the crowd saying, “Merci, merci” several times. Commandeur then invited Oscar winner Jean Dujardin, Clooney’s Monuments Men costar, to present him with the César d’Honneur. The former costars embraced, and Clooney, excusing himself to the audience for his “horrible” French, asked Dujardin to translate for him.

The duo proceeded to bring down the house, as his former costar gently ribbed him by purposefully mistranslating his speech, adding words like “handsome” to Clooney’s description of himself. After the actor listed a number of prominent French actors who have inspired him, Dujardin’s translation was a brief: “Trump is a danger to the world.”

The speech continued to get political, with Clooney cautioning the audience, “As we stand here today the world is going through some pretty momentous changes, not all for the best.” He added, “As citizens of the world we’re going to have to work harder and harder not to let hate win.” Dujardin added in French, “And for the 2024 Olympic Games be held in Paris and not Los Angeles.”

As for his expectant wife, Clooney gushed, “To my wife Amal, there isn’t a day that goes by that I’m not proud to be your husband. And I am excited about the years to come, and particularly the months to come. I love you very much.”

RELATED: George Clooney Speaks Out for the First Time on Becoming a Father — ‘It’s Going to Be an Adventure’

Clooney was in France last May for the world premiere of Money Monster at the Cannes Film Festival. His next directing project, Suburbicon, is slated for release later this year.

The César Awards is an annual ceremony recognizing the top achievements in the French film industry and is comparable to the American Oscars. Last year’s honorary César — an award named after the French sculptor who designed it — went to Michael Douglas. Past honorees have included Scarlett Johansson, Sean Penn, Johnny Depp and Sylvester Stallone. 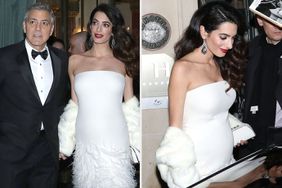