They're with Her: George and Amal Clooney Will Host Fund Raisers for Hillary Clinton – and Lucky Raffle Winners

Campaign cocktails with Hillary, George and Amal, anyone?

George and Amal Clooney will be co-hosting cocktails and dinner with Democratic hopeful Hillary Clinton next month in Los Angeles and San Francisco the actor confirms to PEOPLE. Proceeds will go to the Hillary Victory Fund.

The Clinton campaign is also running a contest giving supporters across the country the chance to meet Clinton and the famous couple at the Clooneys’ home. Would-be guests can text CLOONEY to 47246 to enter to win starting now.

The actor and activist previously promised to help the former secretary of state get elected in any way he can: “whatever she wants, whatever way I can help,” he told Fusion‘s Jorge Ramos last May. Clooney called Clinton a “tremendous candidate” and said he would be “very happy” if she won the White House.

“Let’s put things into perspective,” he said. “You know, the truth of the matter is, in election season, things go crazy, and the loudest voices are the furthest and most extreme. So you hear a massively stupid idea, like we’re going to ban Muslims from the country. Now, we’re not ever going to do that. It says in the Statue of Liberty, bring us your huddled masses. It’s not what’s going to happen.”

Though Clinton has Clooney’s vote, he does have love for another Democratic hopeful.

“I really love Bernie Sanders,” Clooney told The Guardian earlier this month, “and am really glad he is in the debate. He is forcing the conversation to things that never get talked about in US politics: disparity between the rich and the poor, which is getting worse and worse every day.” 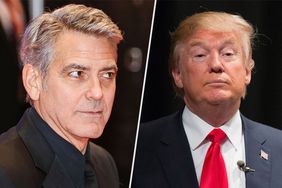 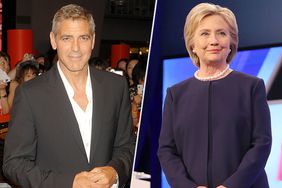 George Clooney's Glowing Endorsement for Hillary Clinton: She's the 'Only Grown-Up in the Room'