All the Details! George & Amal Clooney Celebrate with Post-Wedding Party in England

The party’s not over for George and Amal Clooney.

Nearly one month after their wedding in Venice, the newlyweds celebrated again, this time with a party on Amal’s home turf.

The Saturday night bash was hosted by the bride’s parents, Baria and Ramzi Alamuddin, at the historic Danesfield House Hotel and Spa 40 miles outside London in Buckinghamshire.

On the guest list: more than 200 friends and family members – more than attended the wedding itself – many of whom traveled from Amal’s native Lebanon, Saudi Arabia and Bahrain. Among them were CNN’s Hala Gorani, former Lebanese prime minister Saad Hariri, government ministers and ambassadors from several Middle Eastern nations and colleagues from Amal’s legal firm, Doughty Street Chambers.

“We’re so proud to have George in the family that I’m traveling from Beirut to London just to kiss him and say, ‘Welcome!’ ” one family member told PEOPLE.

Amal, 36, was spotted driving to the party in a gold metallic dress and bold berry-red lipstick alongside George, 53.

Ramzi Alamuddin spoke first to welcome guests and thank them for making the trip to London, according to a source. He then introduced George, who joked to the crowd: “Being Irish, I’m used to large families but this is the first time in my life I’ve seen a family as big as this one.”

“George was very nice, absolutely adorable. Amal looked incredible and they seem very, very much in love,” adds the source. “George went from table to table to meet everyone and at more than one table, when he noticed glasses were empty, he got a bottle and poured wine into everyone’s glasses.”

‘It was a very sympathique soiree,” says a guest. “Very polished and a little low-key than you thought it might be.” Adds another source: “There were no other famous people. It was 90 percent her family. It was a lovely family celebration.”

The Clooneys have both been back to work since the multi-day wedding celebration, which quickly established Amal as a fashion force.

No gondolas were involved in the British bash, but it didn’t lack for glamour. Located on 65 acres of formal English gardens overlooking the Thames River, Danesfield House, which dates to 1725, features fairy-tale Tudor-style towers, historic tapestries and ornate ceilings. Guests arrived via a hedge-lined path leading to a doorway decorated with orchids draped over a tree stump. After a reception in the hotel’s main hall – with a high vaulted wooden ceiling and a vast fireplace at one end – festivities moved to a large tent, where tables were set for dinner with black tablecloths, centerpieces of leafy branches and, in a quirky touch, ceramic cockatoos. Potted laurel trees and white roses also decorated the party.

The menu came from the hotel’s Michelin-starred restaurant, with choices of foie gras or smoked salmon starters; roasted filet of beef, sea bass or a risotto for mains; and mousse au chocolat or a strawberry tart for dessert.

The couple also served his-and-hers signature drinks: a cocktail made with tequila, citron vodka, lime juice and ginger ale for him; one with vanilla vodka, passion fruit liqueur and lime juice for her. 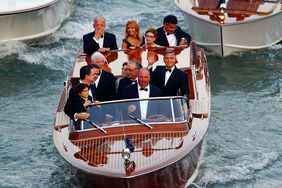 Amal Alamuddin's Wedding Dress and Jewelry: All the Details 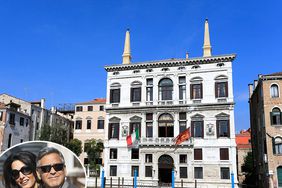 All About George Clooney and Amal Alamuddin's Romantic Wedding Venue