Stuck in prison? You might just have to let it go

The Disney princesses have already been transformed into the women of Game of Thrones, and now a new pop-culture mashup has taken them from Westeros to a slightly less fantastical pop-culture world: Litchfield, the minimum-security federal prison from Orange Is the New Black.

Elsa from Frozen takes the Piper role, which makes sense; they’re both privileged blondes with killer eyebrows. Elsewhere, Snow White gets the Morello role, while Merida from Brave beats out Ariel for the Red spot.

All in all, it’s a slightly less diverse crew than the one you’re familiar with from Orange Is the New Black, but hey, so is nearly every other pop-culture artifact.

Frozen Is the New Black comes to us courtesy of YouTube animator Leigh Lahav, whom you may recall from 2013’s hilarious Hobbit–Mean Girls spoof, "Mean Elves". 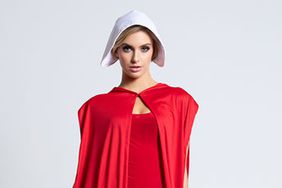