Jennifer Aniston, Courteney Cox Arquette, Lisa Kudrow, Matt LeBlanc, Matthew Perry and David Schwimmer will be getting very friendly with their bankers. In a deal that wasn’t clinched until the wee hours of Sunday, the cast members of NBC’s “Friends” agreed to return en masse for $20 million a year each for the next two years at least, according to reports. Besides getting a bigger chunk of the lucrative syndication rights of the show, the actors will see their salaries mushroom to $750,000 per episode. This season — the sitcom’s sixth — they were collecting a reported $125,000 each per show. In their contract negotiations, they were said to be demanding $1 million per episode. The season finale of “Friends,” which is produced by Warner Bros. TV (which, like PEOPLE, is a part of Time Warner), will take place in a one-hour episode to air this Thursday.

'Friends' to Gather for a 9th Season? 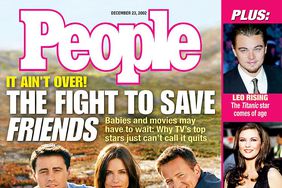 Raymond to CBS: How Much Do You Love Me?

PEOPLE: A World Without 'Friends'?