Britney Spears has “suffered from a psychological disease for years,” says a source close to the singer.

Two separate sources who are acquaintances of the family believe the singer has never been formally diagnosed with bipolar disorder, but “there is no question she is bipolar … she’s had manic episodes for years.”

According to Dr. Diana Kirschner, who has not treated Spears but is an expert on the subject, “people who show patterns of behavior like Britney are suffering from a dual diagnosis. They have both a substance abuse problem and a bipolar disorder or manic disorder.” (In September, Spears was characterized by the court in her custody case to be a “habitual, frequent, and continuous” user of drugs, and was ordered to undergo random drug tests, but it’s unclear if any tests returned positive.)

Michael Cartwright, the founder of a high-end treatment center in Malibu, has said that based on media coverage of Spears’s behavior, she appears to have a drug and alcohol addiction and bipolar disorder. “She seems deeply ill to me,” he said last year, when Spears spent time in a rehab facility, the Promises Treatment Center in Malibu.

Several friends of Spears have been told that the singer has taken anti-anxiety medication, “and who knows what she’s on now. This is really a matter of her being unstable, not suicidal … she’s not balanced.”

PEOPLE has learned from multiple sources that the singer also suffered from depression after both her pregnancies. “She had postpartum depression after Preston was born,” says a source who was close to the family during her marriage to Kevin Federline. “She didn’t want anyone’s help … It got worse after Jayden was born.”

Dr. Kirschner says bipolar disorder “usually starts in young adulthood from age 18 through early twenties. Up until that point, the person appears to be pretty normal, but it’s like a ticking bomb.”

She adds: “When a person has this kind of problem, it’s very hard for them to be a good parent. The main thing is for the person to go through treatment and recover … But they generally have to hit bottom in order to turn around and recover. If the person is laughing wildly as they’re taken away in the ambulance, that does not indicate that there’s much connection with the consequences of their behavior.”

A close family friend says “the tragic thing is that Britney loves her children and would never knowingly put them in harms way. Her mental instability is getting in the way of her making proper judgment and it’s extremely unfortunate.” 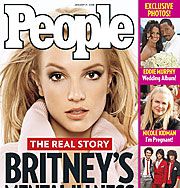 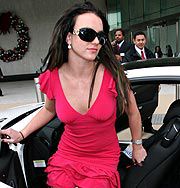