NBA star Rick Fox – who’s been estranged from wife Vanessa Williams for more than 18 months – is now filing for divorce from the singer-actress, his spokeswoman confirmed Tuesday.

Though no reason has been given for the divorce, Fox’s rep, Staci Wolfe, tells the Associated Press that their focus is on daughter Sasha, 4.

“They are both extremely devoted parents, so the most important thing to them right now is the welfare of their child. They are committed to working out what’s best for her.”

The couple married in a quiet and private ceremony on a Caribbean island in the summer of 1999, followed by a New York City church wedding on Sept. 26 of that year.

But an insider told PEOPLE in July that a split wasn’t “entirely surprising, since they’ve spent their entire marriage living on opposite coasts.”

Fox, who played for the Los Angeles Lakers for seven years was traded last week to the Boston Celtics, though injuries could cause him to retire, Celtics director of basketball operations Danny Ainge told the AP. He has also dabbled in acting, in the movie Holes and the HBO series Oz. Meanwhile, Williams, who most recently starred with Cedric the Entertainer in Johnson Family Vacation, has maintained her residence in Westchester County, N.Y. 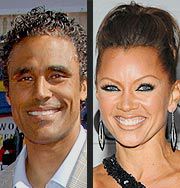