See snapshots from the couple's "fairy tale wedding," which the celebrity chef planned

When Food Network chef Robert Irvine married pro wrestler Gail Kim on May 10, he had planned a night of surprises for his bride-to-be.

“He wanted to give me the fairy tale wedding,” Kim, 35, tells PEOPLE, adding that she knew nothing more than the location, time and date. “I didn’t know the colors of my wedding or what my bouquet would look like! But I trusted his taste.”

A horse-drawn carriage picked up Kim for a brief tour around the vineyard of California’s Charles Krug Winery before her debut in front of 160 friends and family members.

“I cried when she walked down the aisle,” says Irvine, 46. “She was jaw-dropping – this glow of beauty, wearing a dress with a long train. She looked so beautiful.”

And the surprises didn’t end there: Chef Masaharu Morimoto serenaded the couple with a Japanese love song, and Kim enlisted the help of best man (and fellow Food Network star) Guy Fieri to cater a rehearsal dinner.

Guests were treated to an interactive experience at cocktail hour. “Chef Morimoto made sushi,” says Irvine. “It was so fresh the octopus was alive!”

“It was an amazing mix of characters, with all the wrestlers from TNA [Total Nonstop Action] and WWE,” says Irvine.

The couple, who headed to a honeymoon in Greece a few days after the ceremony, met three years ago on the set of Irvine’s show, Dinner: Impossible. He proposed two years later with a chocolate diamond (the naturally brown kind, not an edible ring).

Says Kim: “He has a sweet, sensitive side. He’s truly such a softie at heart.” 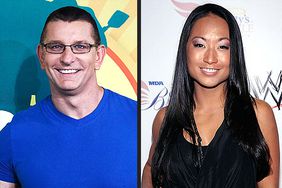 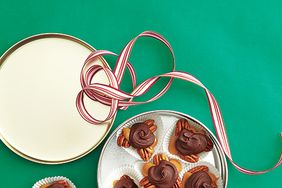 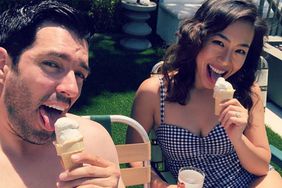