Farrah Fawcett Memorabilia Up for Auction in Beverly Hills

The auction featuring the late actress's items will be held in Beverly Hills on Dec. 5

Farrah Fawcett fans: Want to own keepsakes inspired by or even created by the iconic actress?

Several Fawcett-related items will be up for bid as part of Julien’s 2014 Icons & Idols Auction in Beverly Hills this Friday.

Highlights include a nude sculpture the actress made herself and signed “Farrah, 96,” as well as a script book filled with memorabilia from Fawcett’s television movie, Baby.

But the biggest item up for grabs is a framed table linen by Andy Warhol. The linen – which was part of a legal battle last year between Fawcett’s longtime lover Ryan O’Neal and her alma mater, the University of Texas at Austin – was a gift from Warhol to the couple and featured doodled hearts.

“Farrah and I were new lovers. We were at a dinner celebrating Andy’s new book at the home of Lynn and Oscar Wyatt in Houston, Texas,” explained O’Neal about its origins. “I had known the Wyatt’s, and Andy Warhol, for over a decade and during the course of the dinner, Andy observed Farrah and I. [Warhol] saw the love between us and it inspired him to draw … right there on the tablecloth. Two hearts joining as one.” 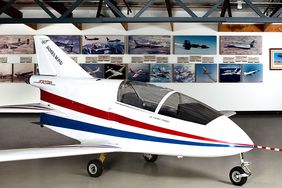 Bid on the Jet from 'Octopussy' , Plus More for the Bond Fan on Your Holiday List