See photos of the country star posing as Twiggy, Brigitte Bardot and Grace Kelly in the new issue of Redbook

"It was hard for me to look at myself as Twiggy," says Faith Hill, 41, who posed as three iconic blondes of her choice for Redbook magazine's May issue. "I felt she had such an innocence . . . Her version was beautiful and flawless, but for me, as a woman who's come into her own a little more comfortably, it's just a different kind of beauty."

"I felt least like Brigitte of all three women we did," says Hill, who is married to country superstar Tim McGraw and has three daughters (Gracie, 12, Maggie, 10, and Audrey, 7). "Brigitte possesses this sensual essence that is so powerful . . . if I could possess that sensuality, I would want to possess it like she does."

"My mother-in-law has always told me that I remind her of Grace Kelly. I think it's about how I carry myself, how I look in photographs, that sort of thing," Hill says. "I think, too, it's probably that I have this seemingly high-profile life, like Grace did, and that we were both the mother of three children."

"At the end of the day, for me beauty has a lot to do with comfort and being around my family," Hill tells Redbook with a laugh, "and most likely no makeup!" 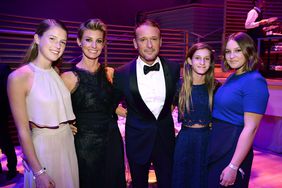