See how Longoria and Parker celebrated with a whirlwind of festivities leading up to their big day. By Aaron Parsley and Brian Orloff

Before their big church wedding and lavish reception on Saturday, Eva Longoria, 32, and Tony Parker, 25, make it official in a civil ceremony at Paris's city hall on Friday. The couple then headed to dinner at Baccarat restaurant for their first meal as a married couple.

Longoria arrives at the city hall building in a short pink Chanel dress but changed inside into a white feathery gown for the low-key civil ceremony attended by only a few friends and family members, pals confirm to PEOPLE.

GOING TO THE CHAPEL

The following day, the couple exchange vows at the Church of Saint Germain l'Auxerrois in Paris before a much bigger crowd – 250 guests.

For her walk down the aisle, Longoria wore a couture Angel Sanchez mermaid gown made of silk wool, with silk gazar metallic embroidery, a scoop back and a long train.

Longoria's longtime pal Mario Lopez heads into the church with his girlfriend – and Dancing with the Stars partner – Karina Smirnoff. "It was so great – such a fun wedding," Lopez told PEOPLE.

Felicity Huffman, who threw her Desperate Housewives costar one of two bridal showers in L.A., also makes her way inside the church with husband William H. Macy.

Guests feted Longoria and Parker's union at a lavish reception – complete with fireworks – just outside of Paris at the Chateau Vaux-le-Vicomte. The 17th-century castle hosted more than 200 VIPs, including Longoria's Housewives costars Teri Hatcher and Nicollette Sheridan, Sheryl Crow and Jessica Alba, who celebrated with the couple into the early morning.

Just a week before their wedding day, Longoria and Parker enjoyed a different kind of party: a his-and-her bachelor bash at the V.I.P. Room in Saint-Tropez. The two hosted the party – billed as "Love Is in the Air Starring Eva Longoria and Tony Parker" – for 30 friends.

This is a couple that knows how to vive la France! Leading up to their nuptials, Longoria and Parker take time for some pre-wedding fun – where else? – at Paris's Disneyland.

The sightseeing continued the following day as the Desperate Housewives star steps out for a glittering night in Paris with her fiancé.

Another feature of the pre-wedding week celebration: a boat cruise along the Seine river for Longoria, Parker and their closest friends. The group hit the decks on this Yachts de Paris boat the night before their civil ceremony, under the lights of the twinkling Eiffel Tower.

Longoria's costar Hatcher – who threw her a second bridal shower – takes a stroll through Paris with daughter Emerson Rose a day after joining the happy couple on the scenic boat cruise.

Just one day after their glamorous Parisian wedding Eva Longoria and Tony Parker return Stateside, touching down briefly at Miami International Airport on Sunday. Next stop? Reportedly a romantic (and tropical) honeymoon destination!

Eva Longoria and Tony Parker Marry in a French Church 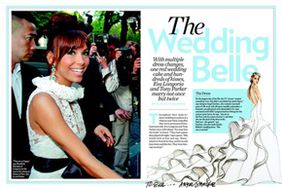